Blog Tour Book Review: The Girl In The Painting. 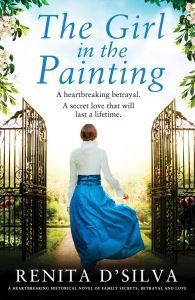 The mere mention of India is always enough to pique my interest because, even though I saw a tiny amount of Andhra Pradesh on a work trip several years ago, I fell in love.

I can’t wait to go back one day but in the meantime, I live vicariously though books such The Girl In The Painting.

It’s a cleverly written tale that seamlessly weaves the stories of three women together.

I was delighted to be asked to take part in the blog tour for this book as I genuinely couldn’t put it down.

India, 1926: English Margaret arrives with her new husband Suraj at his family home, set amidst beautiful rolling hills, the air filled with the soft scent of spices and hibiscus flowers. Margaret is unwelcome, homesick and lonely, but her maid Archana, a young woman from an impoverished family, reminds her of her long-lost sister, a tiny glimpse of home in a faraway place.

As Margaret and Archana spend more time together, an unexpected friendship blooms. But in British India the divide between rich and poor, English and Indian, is wide, and the clash between Margaret’s modern views and the weight of tradition on Archana will lead to devastating results…

England, 2000: When Emma’s grandmother gives her a mysterious painting, and asks her to take a message of forgiveness to an old friend in India, Emma is relieved to have some time and space to make a decision about her future. But as she fulfils her grandmother’s wish, a secret kept for over seventy years is finally revealed – the story of a day spent painting by a stream full of water lilies, where a betrayal tore three lives apart forever…

By the time I finished The Girl In The Painting my phone was on 1% battery.

As notifications started to pop up telling me I had 20% left, then 10%, I started panicking that it wouldn’t last until the end.

I could have got out of bed and plugged my phone in but I was totally engrossed and didn’t want the interruption. Thankfully all was well and it stayed alive – just.

The narrative jumps backwards and forwards in time and switches between India and England but is easy to follow and the time hops keep things lively.

Renita D’Silva does an amazing job of conjuring the sights, sounds and even smells of 1920s Bombay, now Mumbai, as well as a more rural area, which despite its wide open spaces definitely felt the more claustrophobic of the two.

What’s interesting is the themes, including duty, love, family and traditional roles, flow between the decades (and countries), which brings an added poignancy to the book.

All three characters were well developed and memorable for their own reasons. I liked how the story unfolded and the ending really got me thinking (no spoilers).

Some points I felt were repeated but maybe most people wouldn’t read it in just a couple of sittings so it would be less noticeable – and maybe even helpful?

This might be the first book I have read by this author but it won’t be the last.

My rating: Four and a half stars.

Renita D’Silva loves stories, both reading and creating them. Her short stories have been published in ‘The View from Here’, ‘Bartleby Snopes’, ‘this zine’, ‘Platinum Page’, ‘Paragraph Planet’ among others and have been nominated for the ‘Pushcart’ prize and the ‘Best of the Net’ anthology. She is the author of ‘Monsoon Memories’,’The Forgotten Daughter’, ‘The Stolen Girl’, ‘A Sister’s Promise’, ‘A Mother’s Secret’, ‘A Daughter’s Courage’, ‘Beneath An Indian Sky’.

With thanks to Bookouture (via NetGalley) for the ARC and the opportunity to take part in the blog tour for this book. Please do check out the other reviews.

6 thoughts on “Blog Tour Book Review: The Girl In The Painting.”