When our latest craft box arrived I was a little despondent because surely nothing could top paper flowers? Had we peaked too soon?

I opened it up and you know in films when a child lifts the lid of treasure box, the special effects kick in and they are bathed in a golden glow? Well, that almost happened, thanks to the spangly gold card that had been included.

My mind was soon racing with ideas but it was actually the recent CBeebies production of The Tempest, which Freya is obsessed with, that inspired our craft. I thought we could put on a play using ‘hand’ puppets with the theme of this month’s box, which is ‘creatures’.

Freya loves putting on shows and when I suggested it she couldn’t wait to get started. 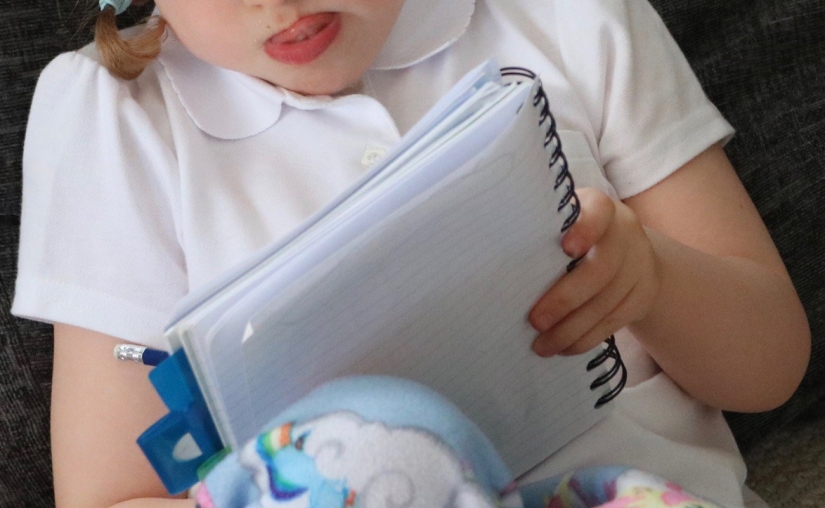 Tongue out in concentration, Freya got to work writing a list of creatures she thought we could include in a play. She decided on a butterfly, a ladybird, a blackbird and a bumble bee. This gave me a very rough idea for a story and I suggested we added a dragon, which she was more than happy to do. I explained my tale but, apparently, it was missing a little something (everyone’s a critic, right?). And that something was, of course, a queen fairy named, can you guess? Yes, Freya!

With a character list and rough story idea, we set to work making the puppets. Freya is getting pretty good at drawing around her hand and only needed a bit of help. Although my artistic skills are somewhat lacking, I added in a head and tail for the dragon as best I could.

For some reason, scissors are one of Freya’s favourite things at the moment. I often find her sat up the dining table snipping up bits of paper (and the occasional bill). I cut out a few others while she was working on hers. 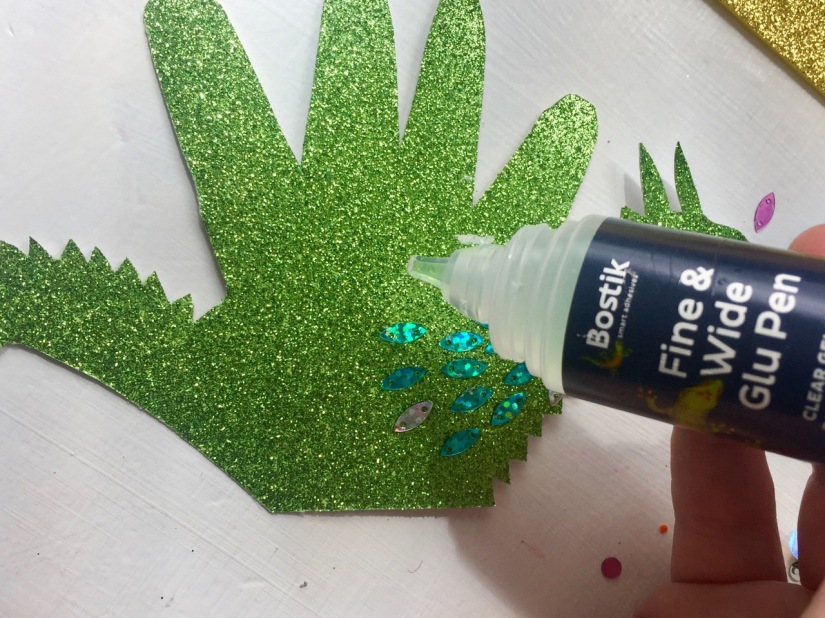 Now comes the really fun part – decoration. I thought the little sequins looked like scales so we set about covering the dragon with them

Freya was VERY specific about decorating the fairy in her likeness – although she felt she needed glasses. I also managed to deeply offend her when I offered her a brown pen to colour in the hair. “My hair is not brown,” she said. “It’s golden!” Oops. I didn’t have a gold pen but I tried to make up for it by making her a gold crown and wings. 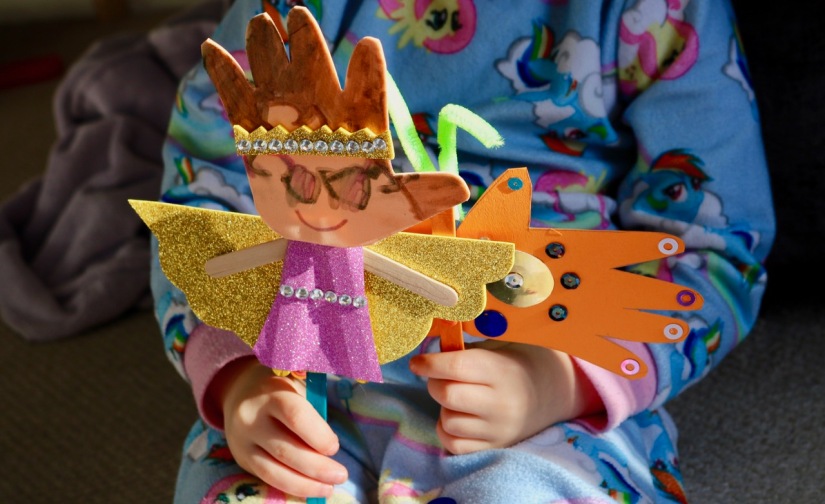 She was so pleased with it she wanted to take it to school to show her teacher – and ended up telling the whole class about our crafting activities.

We left everything to dry overnight and then, because she gets up ridiculously early, there was plenty of time to put on a show before school, with the Playmobil as the audience. We’ve also used the puppets several times since.

I’ll post one of our tales below. I started it off and Freya pitched in with her ideas about what should happen, particularly the ending. I don’t think I’ll be writing children’s stories any time soon but Freya might.

This craft actually turned out to be one of the most creative and fun ones we’ve done so far. I think we both really enjoyed it.

* Please note: We receive a craft box from Craft Merrily free of charge, as part of our role as Tots 100 Bostik Bloggers, in return for this post.

Once upon a time in a pretty garden not very far from here, there lived a group of creatures. There was a beautiful Butterfly, a buzzing bumble Bee, a bustling Blackbird and a lovely Ladybird. They all lived happily together among the green grass, colourful flowers and blooming trees.

One day, as they were busily going about their business in the sunshine, a dark shadow was cast over the garden.

“Is it a bird?” Butterfly asked.

“No, it’s too big for a bird.” Blackbird explained, a quiver in his voice.

“Is it a plane?” Bee risked a look up into the sky.

“But it’s not making any noise,” said Ladybird.

Suddenly the shadow grew bigger and a huge dragon swooped over them.

“Ahhhh,” they all screamed and fled into the bushes – only coming back out when they could be sure the dragon had gone.

Over the next couple of days the same thing kept happening. The creatures were very fearful about venturing into their little patch of garden.

“Why does it keep coming?” Bee wondered.

“It clearly wants to gobble us all up for its lunch,” said Ladybird.

The following day it appeared once more.

“Wait, wait, please!” The dragon cried as he swooped down but the creatures quickly disappeared into their hiding place.

“As if we are going to wait for him to eat us,” cried Blackbird.

“Will we ever be safe from the dragon again?” asked Butterfly.

They knew they needed help and so early the following day they all jumped on Blackbird’s back and he flew swiftly over the fence to a garden three houses down where the fairies lived inside a big old oak tree. There they asked to see the Queen of all the fairies, Fairy Freya, sure that she would know what to do.

“So, what does the dragon want?” the golden-haired fairy asked them, regally, from her throne.

“To eat us,” Ladybird said, confidently.

“It has tried to eat you?” she quizzed them.

“It swoops down,” said Butterfly, spreading her wings in what she thought was a threatening manner.

“Then we run away,” they all agreed.

“I see,” said the very wise fairy, thoughtfully. “And has he ever tried to speak to you?” 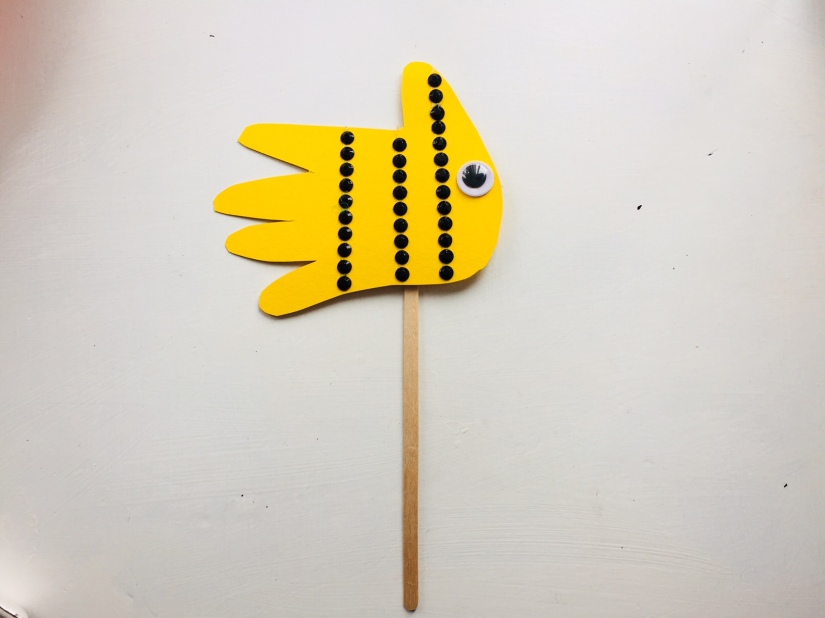 “Although,” said Ladybird, “he did call for us to ‘wait’ last time.”

“Right,” Fairy Freya said, standing up. “I know just what to do.”

With a wave of her wand she transported them all back to their garden.

It didn’t take long. Soon a dark shadow was cast across the garden again. As usual the dragon swooped to the ground. The creatures all cowered behind brave Fairy Freya.

He seemed quite taken aback. “You’re not going to run away?”

“No, but I’d like to know why you keep visiting the garden and frightening my friends.”

“Oh, I really don’t mean to scare them. I was flying over one day and they looked like they were having such a lovely time that I thought I could join in but every time I got close they ran away.”

One by one, Bee, Butterfly, Blackbird and Ladybird came out from behind Fairy Freya.

“You just want to be our friend?” asked Blackbird.

The creatures looked at one another and nodded.

And so each day Dragon arrived and spent time playing in the garden with the creatures. They all had a lovely time and discovered that while Dragon might be big and a bit different to them, he was still good fun and made a lovely friend.