There was a time when the majority of my holidays were spent sitting by the pool or on the beach (under an umbrella in as much shade as possible) with a lovely pile of books to read.

These days there’s not much sitting around to be done, thanks to Freya’s endless energy but during our recent caravan holiday she was wiped out and in bed by 7.30pm every night – and with no wifi to distract me it meant hours and hours of uninterrupted reading time. Bliss!

Here are the three books that kept me occupied.

Book One – A Year Of New Adventures by Maddie Please. 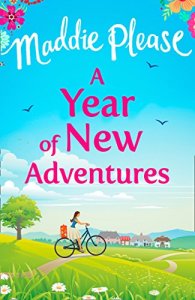 It’s time for Billie Summers to have an adventure … but it might not be exactly what she expected.

Billie Summers has always been quite content in her little cottage in the Cotswolds. Sure, half the house hasn’t been renovated, but what’s the point when it’s only her? Working part-time at her uncle’s bookshop and planning writer retreats with her best friend allows her to pay the bills. What more could anyone want?

That is until Oliver Forest, the bad boy of the book world, turns up to one of her retreats and points out that Billie hasn’t done anything very adventurous. Couple that with her best friend falling head over heels and beginning to drift away from their Friday night wine and dinner plans, Billie is starting to wonder if it isn’t time she took control of her life.

So she starts a list: get fitted (properly) for a bra, fix up rest of house, find a ‘career’ and well, get a tattoo … Her life might just get the makeover it needs, too bad irritating and far-too-attractive for his own good, Oliver keeps showing up …

Because sometimes you need an adventure!

Confession time; I had absolutely planned to save this book for the holiday but I thought I’d have a sneak peek and, boom, a quarter of the book had gone by.

The subject matter definitely helped to pull me in (oh, how I long to go on a writing retreat) but Maddie’s characters are fantastically well written – and not just Billie and Oliver but the eclectic supporting cast too. If you’ve ever attended a creative writing course of any sort, you will recognise and enjoy some of the personalities.

While some of the situations are laugh out loud funny, there’s a lot of heart in this book too.

I’d say this was even better than Maddie’s debut, The Summer Of Second Chances, although I really enjoyed that too.

Jess has lived at the idyllic flower farm on the Isles of Scilly her whole life, but when her boyfriend Adam leaves without explanation, Jess discovers that even her little slice of Cornish heaven can be lonely.

For the first time in Will’s life, he’s met someone he can’t stop thinking about. But nothing is simple when the woman of your dreams is working for you.

Gaby is running away from painful memories, and where could be more perfect than a remote island off the Cornish coast? But to put the past behind her, she must keep moving … however much she might want to stay.

Nothing is simple, even on paradise. Will love bloom for the residents of the little Cornish Isles?

Knowing we were surrounded by fog (again), it was wonderful to snuggle under the lovely warm duvet with this book, which is the second in the series – and now a bestseller on Amazon.

Phillipa sets the story up perfectly from the start so you already know who you’re rooting for. It has just the right amount of highs and lows to make it the perfect holiday read. I had many guesses as to why Adam left Jess and the island but none of them were correct, which made it all the better.

The fact that it was partly set on a flower farm was a big lure for me – although it does show the realities of being waist deep in mud so is perhaps not quite as idyllic as I thought. Having said that, the setting, which is largely fictitious but based on the Isle of Scilly, had me, once again, wanting to pack up and move to a remote island.

I haven’t read the first book in the series but it has now been added to my TBR pile, especially having met Maisie in this book. I definitely want to read her story.

Book three – The Holiday Cottage By The Sea by Holly Martin.

Tori Graham is in need of a holiday. Trying to piece her heart back together after losing the love of her life, she escapes to Blossom Cottage, with its picturesque views of the sea. And plans to spend the summer in gorgeous Sandcastle Bay, where her best friend Melody Rosewood lives.

Tori’s not expecting her summer by the beach to be eventful, until she meets handsome and mysterious Aidan Jackson…

Aidan looks after the holiday cottage Tori is staying in. Healing from past hurts, he wants to avoid any further chance of heartache. But could this newcomer be the breath of fresh air he needs?

Finding herself embracing life in the coastal community, Tori starts to fall in love with Sandcastle Bay and its welcoming cast of residents. But that’s not all she begins to fall for, as Tori is swept away by Aidan’s genuine heart and mischievous sense of humour. The attraction between them is undeniable, but will a simple holiday romance be enough?

As Tori’s stay in Sandcastle Bay comes to an end she has a tough decision to make…. Has her heart found a new place to call home?

I’m a huge Holly Martin fan and I can’t tell you how thrilled I was that her latest book came out on April 12th while we were still away. I left Freya in the caravan with my parents just after lunch, nipped to the bar (where the wifi was) and downloaded the pre-ordered book while enjoying a hot chocolate (shh don’t tell them that bit).

It was very hard to wait until the evening to begin reading – and even harder to put it down and eventually go to sleep (that was a late night).

The chemistry between Tori and Aidan is almost palpable, right from the start. Their developing relationship makes for a lovely read – and provided some truly funny moments, as well as some really emotional ones. I also loved the other motley crew of characters in this book and the beautiful setting. The way Holly weaves in details about village traditions is wonderful and I felt a real sense of community (even though it’s made up!).

The only downside is that I have to wait until June for the next book in the series.

Do you save books for holiday? How many do you normally take away with you?