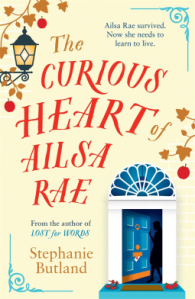 This book left me tingling in a way that only happens when I know I’ve just read something special.

The Curious Heart Of Ailsa Rae is a beautiful (I don’t want to say heartwarming, given the nature of the beast), wonderfully written, touching journey, which almost felt like a true story.

I’m predicting big things for this book – if the film rights haven’t been bought yet I think someone will snap them up very soon.

Ailsa Rae is learning how to live.

She’s only a few months past the heart transplant that – just in time – saved her life. Life should be a joyful adventure. But . . .

Her relationship with her mother is at breaking point and she wants to find her father.

Have her friends left her behind?

And she’s felt so helpless for so long that she’s let polls on her blog make her decisions for her.

She barely knows where to start on her own.

Then there’s Lennox. Her best friend and one time lover. He was sick too. He didn’t make it. And now she’s supposed to face all of this without him.

But her new heart is a bold heart.

I’m trying very hard not to gush but it’s difficult because I really did enjoy it.

There’s something about Ailsa Rae that stuck with me long after the story finished but it’s more than that, I was invested in and cared about all the other characters too.

Having said that, it’s not just a great story, it’s raising awareness about the important issue of organ donation. Ailsa seems very aware that her new heart had a life before her. She gives it a name and thinks about the person it once belonged to and how they might have dealt with different situations. However, that was only one element, it felt like Stephanie took a 360 approach; looking at it not just from the recipient and donor but both families and also the people and families for whom time runs out. And she did all that without making it feel cumbersome, which deserves a round of applause in my opinion.

Maybe it’s helped by the way it’s written, the mix of story and blog posts moves it along and I liked the way Ailsa turned to her readers for help at first (as a blogger, that part of it was very familiar). It stops it being too heavy.

Add in a romance and some Shakespeare and it was job done for me. I urge you to give it a try.

With thanks to Zaffre (via NetGalley) for the ARC in return for an honest review.

3 thoughts on “Book Review: The Curious Heart Of Ailsa Rae.”