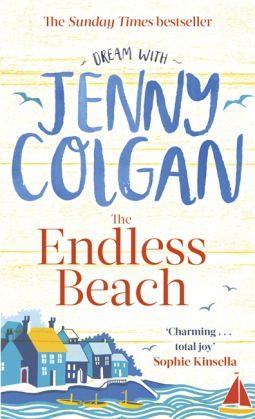 I couldn’t have picked a better book than Jenny Colgan’s The Endless Beach to kick off my New Year reading.

Romantic, emotional, poignant, I could go on and on with a long list of all the things that make it amazing but I won’t.

What I will say is that while I was already a fan of Jenny’s work, this one is now my absolute favourite.

On the quayside next to the Endless Beach sits the Summer Seaside Kitchen. It’s a haven for tourists and locals alike, who all come to eat the freshest local produce on the island and catch up with the gossip. Flora, who runs the cafe, feels safe and content – unless she thinks too hard about her relationship with Joel, her gorgeous but emotionally (and physically) distant boyfriend.

While Flora is in turmoil about her relationship. her best friend Lorna is pining after the local doctor. Saif came to the island as a refugee, having lost all of his family. But he’s about to get some shocking news which will change everything for him.

As cold winter nights shift to long summer days, can Flora find her happy-ever-after with Joel?

I like books set in shops (anything to do with food/chocolate, really) and I thought I had a good idea of what to expect but it completely blew that out of the water.

With a cast of characters who quickly got under my skin, I read well into the night, got up early to continue – and even read in the car and made myself feel a bit ill (that’s Mark’s driving for you) but it was all worth it.

The quality of the writing meant I felt Flora’s frustration and loneliness at Joel’s distance and Saif’s story actually had me in tears but I was heavily invested in all of them, including Flora’s brothers.

As Jenny explains at the start, she first wrote about the tiny island of Mure (where I now want to live) and its residents in A Distant Shore, part of the Quick Reads series, but I hadn’t read it and didn’t have any trouble keeping up.

I’m hoping there might be another book or three in this series, there is so much potential. If there isn’t one already being written I’m going to start a petition to set Jenny to work. As soon as you’ve read this one, I think you’ll join me.