After successfully re-decorating of our bathroom, I was already talking about moving on to the next project – and, more than a year later, I’ve finally managed it.

Our bedroom was last decorated shortly after Mark moved in eight and a bit years ago.

Before that it was rather…flouncy, shall we say. A friend described it as my “boudoir” – and I suppose with one wine red feature wall and lots of draped red and gold sheer fabric over the window it perhaps did have that sort of feel.

When Mark arrived one of the things he came with was a giant (and I mean HUGE) canvas map of the world, which took up an entire wall of the room – and looked completely out of place.

To make him feel more at home – he had just moved 150 miles away from family and friends, after all – I painted the walls Natural Hessian and went for a more neutral, calming look of browns and creams.

And that’s the way it has stayed – until now.

It was in a bit of a state but I just didn’t have the time or energy to tackle it. Two things got me motivated. The first was that I bought the most beautiful new duvet cover in the world (and matching pillows and a cushion).

For the first three weeks I wouldn’t even let Freya sit on it, I loved it that much.

The second thing was that my little sidekick attended nursery for two and a bit hours, four mornings a week, during the last term before the summer holiday and I thought “now’s the time, quick!”.

It was a bit like being on one of those challenge programmes where you have to transform a room in a set time.

I won’t say I’ve done the best job in the world but I am actually rather pleased with the way it looks – especially the wardrobes and drawers.

I knew pine wouldn’t go with my new look and really wanted white but, with a limited budget and being a fan of “make do and mend” I decided I had nothing to lose by painting them.

Not having the money for fancy paint I used B&M One Coat Brilliant White (although I gave them three coats in the end) and they have come up really well, even if I do say so myself. 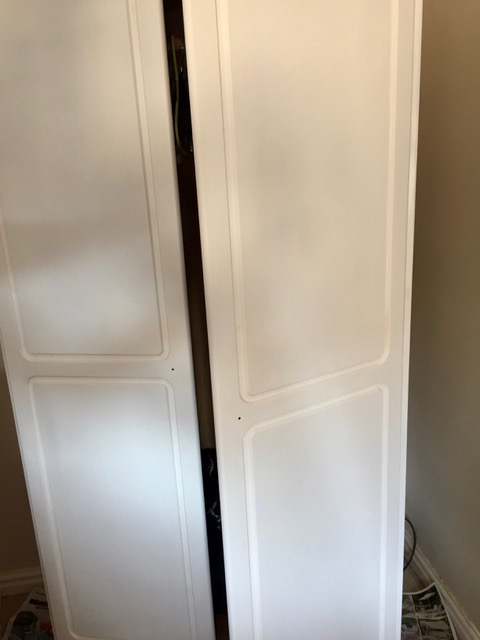 I gave them a light sand first, used a brush to paint the grooved bits and then rolled the rest (excuse the shadows in the pics. It was actually sunny then).

My dad was the one who suggested painting the handles the same colour as the walls. Genius! 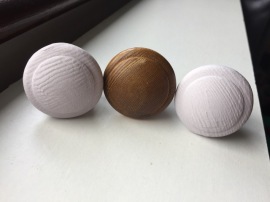 Sadly Mark wouldn’t let me paint his prized West Bromwich Albion mirror, in case I “damaged it”, so I had to treat myself to a brand new one, which, as you can probably tell, I was very upset about. Don’t worry, his mirror has gone in the loft to be used at a future date.

After painting the ceiling and coving, the next job was to tackle the walls. I used a Crown Paint from the Period Collection, entitled Tea Gown. I had bought a tester pot and tried it but the real thing came up a bit less pink and a bit more purple than I was expecting. It went beautifully with the duvet but clashed with the rose pink curtains I had up. Mum to the rescue. She very kindly treated us to a set matching the duvet for Christmas (is it ok to say that word in August?).

I actually love the room now. It feels so light and fresh. I know it’s not going to be everyone’s taste (I’m not even sure Mark likes it that much) and it won’t featuring in Elle Decoration or Beautiful Homes anytime soon but I made the best of what I had.

Next up is the living room, which I’m planning when Freya starts school in September (hopefully it will take my mind off things). Fingers crossed it won’t take until August 2018 for me to finish it!

Have you upcycled anything you’re particularly proud of? I’d love to hear about it.