About 20 years ago my dad went to the opticians for the first time – a visit that changed his life, forever.

The optician spotted something abnormal and referred him to the hospital where he was diagnosed with Retinitis Pigmentosa (or RP). It’s a name given to a group of inherited conditions which all result in a gradual progressive reduction in vision.

He was going blind.

Within weeks he had lost his driving licence (obviously with good reason) and he was also no longer able to work as a forklift truck driver. Since then many of the things he loved (he was a proper jack of all trades, able to turn his hand to anything practical) have became more difficult, if not impossible.

Not once have I ever heard him complain.

His attitude has always been really positive, he just gets on with it as best he can. While some things are a struggle, he is happy to be alive doing what he loves best – spending time with his grandchildren.

Even though his sight has now deteriorated, so much that he often can’t really see what is going on, he loves visiting different places. On Friday we went to Banham Zoo where, among other things, we watched the always entertaining Amazing Animals indoor show. As we went in, I asked Mark to tell a staff member, Steve, that my dad couldn’t see (I did this because the show features audience participation and they seek volunteers but also just in case there was an emergency).

Afterwards we went to see the brilliant outdoor Birds of Prey display, which my mum was especially keen on. Steve was flying a couple of the birds and, as he came into the audience with a beautiful peregrine falcon, he stopped before my dad and explained he was going to gently brush the bird’s feathers against his face so he could feel what they were like.

Even though my dad says he simply enjoys being with us, I always feel a little guilty that he’s normally on the fringe of things (as much as I try and take him places I think he will enjoy too). That wasn’t the case on Friday. How many people ever get that close to a peregrine falcon? 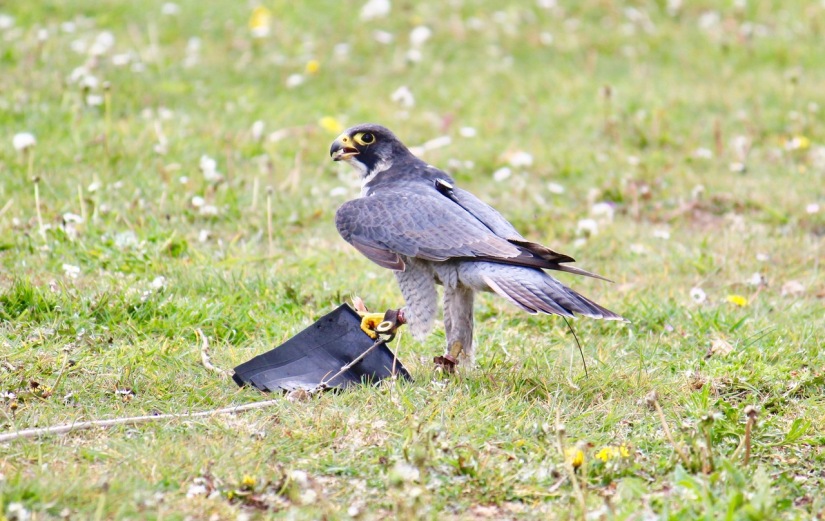 We were all so surprised and touched by the gesture (my dad was thrilled). Thank you to the staff, especially Steve, for making it a day we will all remember for a long time.

My dad gave me permission to share his photo and a bit of his story.

I’ve linked up this special moment with #MySundayPhoto (please click on the camera below to see what other people have posted).

I’ll share some more zoo pics in the week (although approximately 800 of them were of blurred wings). Tomorrow is also my second Behind The Book interview (this time with the fabulous saga writer Susanna Bavin) so please come back and visit again soon.