Book Review: How To Mend A Broken Heart. 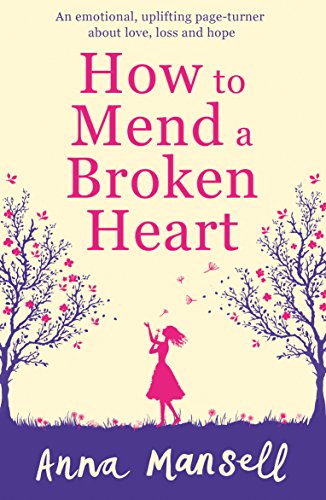 My first thought after finishing Anna Mansell’s debut novel, How To Mend A Broken Heart, was “wow” – it is, quite simply, stunning.

I am in awe of the way this compelling story comes together, especially as certain elements keep you guessing right to the end.

The main characters, Kat, Susan and Rhys, are exceptionally well written and stick with you long after the last page has been turned.

On the surface it would seem like they have nothing in common but, as the story developed, I realised that on more than one level they were kindred spirits.

Before I say any more, here’s the blurb:

Life is good for nurse Kat. That is until the man she intended to marry legs it, she’s unexpectedly promoted to a position with too much responsibility, and a patient arrives on her ward under strange circumstances.

Susan is a mystery. She refuses to speak or interact with anyone, she’s obsessed with a book of fairy tales, and the only name in her diary is that of Rhys – a plumber she barely knows.

Down-to-earth Rhys is trying to get his life back on track after the death of his beloved brother. His mum is his priority, and she needs him as much as he needs her. Or at least she did, until she starts disappearing, leaving him to find comfort in the form of his brother’s girlfriend.

Complicated is an understatement.

As the lives of these three lost strangers intertwine, will they find a way to lay ghosts past, present and future to rest? And when the chance comes to mend their broken hearts, will they be brave enough to take it?

It does tackle some difficult subjects but Anna writes about them in an understanding and sensitive manner and, at its heart, it is an uplifting book – although I certainly needed some tissues on hand.

As I mentioned, this is her debut novel and I actually cannot wait to read the follow up (no pressure).

2 thoughts on “Book Review: How To Mend A Broken Heart.”