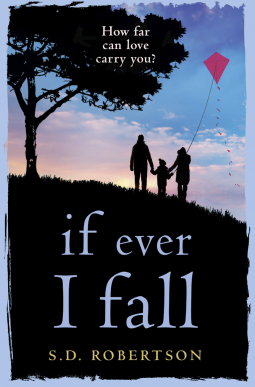 I was glad I didn’t have anything planned immediately after finishing S D Robertson’s second novel, If Ever I Fall.

Early on it felt like two hands reached out of the pages and hauled me into this powerful, compelling and emotional story – and they didn’t release their grip until the final words had been read.

At that point I felt slightly shell shocked and I definitely needed some time to think about the characters, time to process all of the events that had taken place and, most of all, time to acclimatise back into my own life.

This book is well written, clever and absorbing and it definitely warrants five stars, in my opinion.

Is holding on harder than letting go?

Dan’s life has fallen apart at the seams. He’s lost his house, his job is on the line, and now he’s going to lose his family too. All he’s ever wanted is to keep them together, but is everything beyond repair?

Maria is drowning in grief. She spends her days writing letters that will never be answered. Nights are spent trying to hold terrible memories at bay, to escape the pain that threatens to engulf her.

Jack wakes up confused and alone. He doesn’t know who he is, how he got there, or why he finds himself on a deserted clifftop, but will piecing together the past leave him a broken man?

In the face of real tragedy, can these three people find a way to reconcile their past with a new future? And is love enough to carry them through?

I can’t say anything else about the story without giving away the plot but it gradually becomes clear and I think it works really well.

There are changes in tenses that make it easier to keep up and while it is gritty in places, it is packed with emotion throughout.

The fact that it is one of those rare works of fiction that details exactly what it’s like to work for a local newspaper at present is an added bonus – although perhaps that should be expected given that S D Robertson (“feel free to call me Stuart” it says on his website) was a local newspaper editor before leaving to pursue his writing dreams.

His debut novel, Time To Say Goodbye, spent more than six weeks in the Kindle Top 20 and I think he’s got another hit on his hands here.

5 thoughts on “Book Review: If Ever I Fall.”