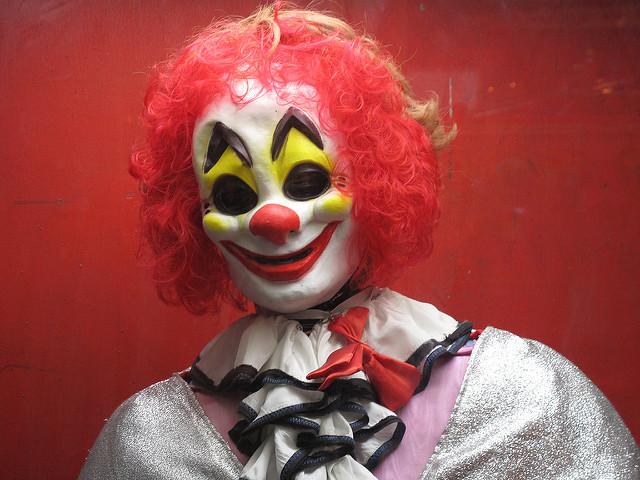 Killer Clowns – So Much More Than Just A Harmless Prank.

Hot topic among the bigger kids gathered outside the local shops before school this morning? “Killer Clowns”.

The boys were showing a lot of bravado, talking about what they would do if they came across one, but I suspect in reality, like most people, they would be utterly terrified.

I can’t see anything remotely funny about being confronted by a grown man (or at least a grown teenager) in a mask, often in a quiet, dark or secluded spot. Children have even been followed to school by them.

If you haven’t heard about it, apparently inspired by pranksters in the US, “Killer Clowns” are now making appearances in many UK towns and cities where their aim is to scare or intimidate children and adults.

What a life goal (or should that be #lifegoals), huh?

To me this isn’t a “prank”, which the dictionary defines as “a trick that is done to someone usually as a joke”, it’s far from it – in some cases they are carrying knives, for goodness sake. Even if they don’t mean to use them, violence is implied.

I feel such anger towards the people doing this. There are enough genuine things in the world we need to worry about without something this ridiculous on top.

It’s not just about taking something innocent from childhood, a clown, and turning it into something nasty and horrible – that’s been done before. Who can forget Stephen King’s malevolent Pennywise from It? (Incidentally even the author has had enough of this strange craze.) But usually people choose to view that scenario rather than have it thrust upon them.

No, it’s far bigger than that.

Freya and I like to roam. Quite often in places that are a bit out of the way or secluded – even our local park is far from overflowing with people. It’s part of the adventure. And why shouldn’t we be able to do that?

What if we came across one of these people?

I’m not generally a violent person but my mother bear instincts roar into life if I feel she is being threatened. And by acting in this way, they are clearly being threatening – however much it might be played down as a harmless high jinks.

I’m sure I can’t be alone in feeling like this. In fact, I know I’m not because one of the dads this morning was telling the boys what he would do to a clown if he got close enough – and it wasn’t give him a hug.

One of my fears is that a confrontation will eventually end in violence and someone will be hurt. Lives will be altered, one way or another, and for what?

What do you think? Harmless prank or something more sinister?

12 thoughts on “Killer Clowns – So Much More Than Just A Harmless Prank.”