A Rubbish Sewer’s Guide to Parenting.

You know how I’m always going on and on about my love of sewing.

Oh no, wait, for a minute there I got confused and thought I was Kirstie Allsopp. In fact, in more than two years of blogging, I’ve only mentioned the subject once – and that was to confirm that my brief dalliance with it was over.

So imagine my surprise when, after greeting my parents at the train station for one of their usual visits, my mum announced she had brought me my own sewing machine.

The station was noisy, the mainline service from London had just pulled in so there was a lot of hustle and bustle as people made their way out of the station.

“A coffee machine?” I thought she said because, even though I don’t drink coffee, that was more likely than a sewing machine.

“No, sewing. SEWING,” she half shouted.

As they had lugged it on two buses and a train I didn’t want to seem ungrateful by questioning the reasoning behind its purchase but luckily, as we joined the mass exit of the station, she explained it.

“When I saw it in the charity shop I thought of you. I knew you needed one.”

Really? You saw a sewing machine and thought of me? Maybe she thinks I’m Kirstie Allsopp too? Do I need one? I’ve managed for 40 years without but maybe I didn’t realise?

The sewing machine had pride of place on the bedroom floor with the rest of the things I can’t find space for (I’m looking at you assortment of Play Doh toys) for four weeks when something happened.

I suddenly got an urge.

An urge to (dum dum duuuuuuuum) make something.

After pondering whether the machine had been whispering to me in my sleep or, rather more unlikely, my mum was actually right, I duly went and got all the things I needed (basically everything apart from the machine) and set to work on making a Tilda Doll for Freya. 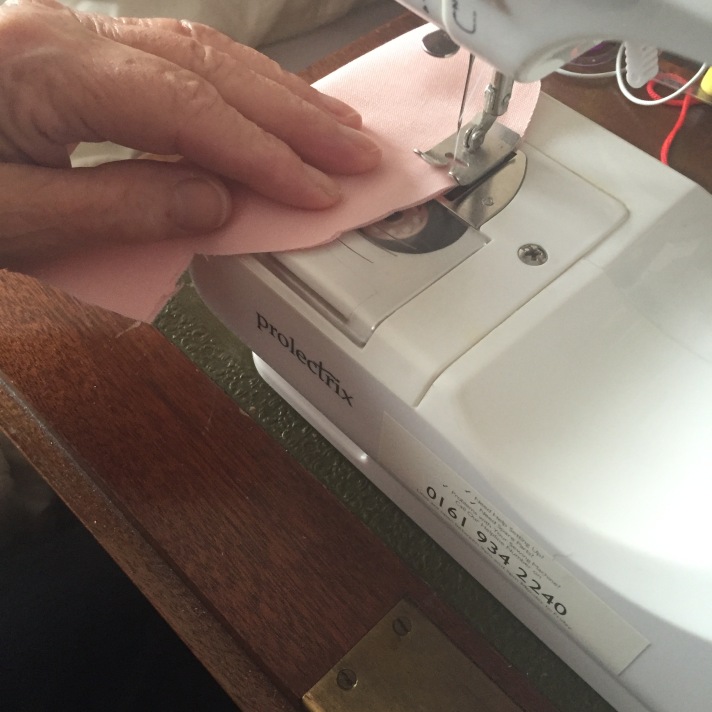 When my mum visited on Monday I asked if she could show me how the machine worked so I could sew all the bits I’d cut out together. Once she sat down she was in her element.

“Never.Touch.This,” she said in a doom-laden tone as I reached to twiddle with a button with lots of numbers on. “You will BREAK the machine.”

“Why would they put a button on there that would break the machine?”

“It’s the tension,” she said, as if that explained everything. “Do you want a go now?”

My own tension increased considerably.

“I see myself more in an assistant role,” I said. “I’ll do the cutting and stuffing and maybe leave the sewing to you?”

“I’ll just show you a bit more,” she said, eventually doing the entire body, leaving me to make the clothes and hair, which I did mostly by hand.

When Mark came home, he commented: “The doll is a more…human shaped than usual, isn’t it?” Which he thought was a good thing.

I was tempted to pretend the lumps and bumps were put in on purpose but apparently I just didn’t cut it out properly (I assumed she would sew along the line of the pattern I had traced. Apparently not.)

It got me thinking though, my approach to sewing is a lot like my approach to motherhood: it isn’t perfect (some might say it’s rather haphazard), I’m happy to ask for help for the bits I can’t do and I will veer away from the pattern if it feels right but at the end of it, all I want is for Freya to be happy.

I explained this to my mum and she laughed and suggested I write a book (perhaps she was trying to steer me away from sewing as a hobby?). I wonder if Kirstie would write the foreword for A Rubbish Sewer’s* Guide To Parenting?

* I actually looked up what people who sew call themselves. There were several options, ones which didn’t make me think of stinky drains, including sewist and seamstress but sewer seemed to fit.

21 thoughts on “A Rubbish Sewer’s Guide to Parenting.”