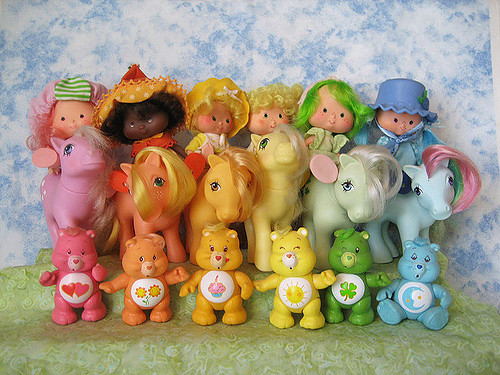 You know you want to be a Care Bear (unless you’re a 13-year-old boy, maybe).

Talk about holding a grudge. I mentioned to my brother that our mum had bought Freya a Care Bears DVD (the original series) for Easter and he instantly transformed into a sullen teenager:

“I still can’t believe I had to go and see that stupid movie with you,” he grouched.

I was almost nine when the original film came out, which would make him 13 *snigger*, and it is the first time I actually remember going to the cinema, which was a huge treat. I’m not sure why he was the one to take me rather than my mum or dad but clearly we bonded.

The Care Bears still hold a special place in my heart (and not just because I was a horrid little sister and delighted in terrorising my brother). I got a bit nostalgic when Freya started to enjoy the new series on Tiny Pop.

So sweet and lovely, I thought.

It was a few weeks after Easter before we got chance to watch the DVD. She was feeling a bit under the weather so I decided to make her a Shepherd’s Pie for her dinner and left her snuggled on the sofa with the DVD on while I cooked.

She suddenly let out a scream that could have shattered glass.

Imagining all sorts – she’d fallen off the chair, been sick, or worse, there was a wasp flying about – I rushed in… to find her on the edge of the sofa pointing, eyes wide, at the television.

One of the great (blue) Machiavellian villains.

I had completely forgotten about him. He’s not in the new series at all. In fact, in Welcome to Care-A-Lot even the “baddy”, King Beastly, who is described as a “frenemy”, is really quite cute and cuddly.

As I couldn’t make her un-see him, I sat down and gave her a reassuring cuddle while we carried on watching. I had to agree, it was actually pretty scary – even the Care Bear Stare is a bit sinister without the beautification of CGI.

As we normally stick to more appropriate children’s tv, it’s the first time she has seen anything remotely upsetting (aside from Postman Pat’s shocking disregard for the parcels he is charged with delivering, obviously) and I was desperately hoping it wouldn’t give her nightmares – we have enough trouble with sleep as it is.

All was fine though and now when the new Care Bears come on at breakfast time she will say: “No, not those ones.” And demands the DVD.

Not quite sure what that says about her.

Anyway, it got me thinking about tele from the olden days. I know she is still very young and we have a lot of children’s television in front of us but, is it me or were kids programmes just more frightening back then (in the 1980s)?

I remember watching several that genuinely had me hiding behind the sofa and no one seemed to think anything of it – certainly no one turned it off.

For example, while I loved Worzel Gummidge, even though he regularly took off his own head and I think once murdered a fellow scarecrow (if that is possible), the minute the Crowman came on I was gone. Doctor Who, which I was allowed to see because my brother loved it, was often viewed through my fingers and Chocky, which everyone at school was watching, actually gave me nightmares.

I’m intrigued to find out what awaits us on CBBC or Pop. Hopefully I won’t find myself behind the sofa again – especially as I am now the one responsible for cleaning behind it and it’s not pretty.

Do you remember any frightening programmes from your childhood?

PS If this is making you yearn for kids programmes from the 1980s/90s please check out Haylee’s excellent nostalgic post featuring many more.