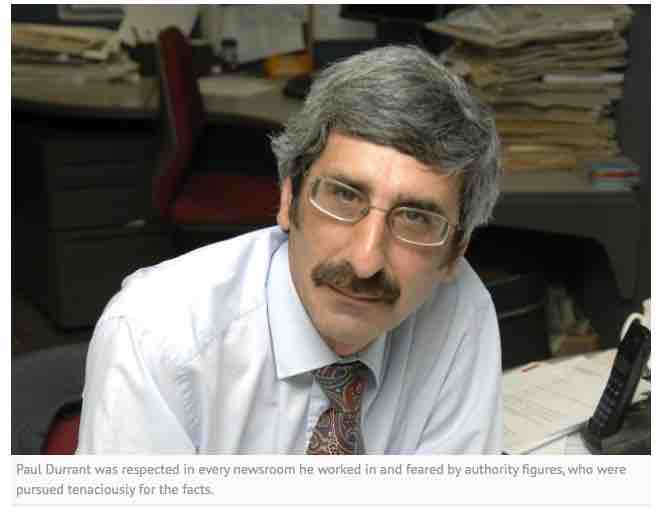 Farewell to a “legend” of the newsroom.

“Alright sexy?” probably isn’t the way most employers would greet their (male and female) employees but then Paul Durrant, Duzza, wasn’t what you might call a typical boss.

Even though we knew it was coming, his death on Wednesday, aged 63, sent a shockwave far and wide. The same sentiments – “legend”, “one of a kind”, “exceptional journalist” -were echoed time and again in the tributes paid by those who worked with him over many years.

I first met the tall, rake-thin man with a mass of black hair and matching moustache at the backdoor of the Eastern Daily Press early one Sunday afternoon in 2002.

He had invited me to come for an interview for the role of senior reporter. I’m not sure why it had to be a Sunday but I remember being grateful that I wouldn’t need to take a day off  – and most likely explain to my then boss where I was going – to travel to Norwich.

The newsroom was quiet as we walked through to his cramped (rarely used, I would later discover) office, with only a few people in at that time of day – their heads popping up from behind their desks like meerkats to see what was going on.

Originally from the West Midlands – you would know this instantly from his accent which had never softened despite having lived in East Anglia for decades – Duzza had worked at many of the same papers I had. We started chatting about people we knew in common, dead or alive, and the conversation carried on from there. It was like catching up with an old friend and only right at the end did it turn to the job.

He was friendly, charming and witty – and not at all what I was expecting. He had a fierce reputation for not suffering fools and many tales of striking fear into junior reporters went before him.

I was wary at first but I never had need to be. He treated me with nothing but care, respect and a lot of good humour.

He told me he had mellowed over the years and maybe he had where people were concerned but when it came to news he was uncompromising in his bid to get to the heart of every story.

When I think about my early years at the EDP, I feel like they were the glory days. I was falling in love with a new city, making wonderful new friends and largely couldn’t wait to get to work every day, which was partly due to the atmosphere he helped create in the newsroom.

Oh I made mistakes, of course. It was a big jump from a weekly newspaper to the biggest regional daily in the country but he gave me the freedom to learn my craft and was there to guide me, push me and, yes, sometimes tell me when a story needed more work.

People often talk about teachers at school that left a mark on them but I didn’t have that. For me – and I know many others – Duzza was the one who shaped me more than any other.

As many people have said, he was an exceptional journalist, a champion of important causes both locally and further afield (he appointed me as environment correspondent at a time when we were still having to explain what global warming was) and a privilege to work with.

He knew he was dying – that the oesophagal cancer was terminal – he even had a party to say goodbye in the summer. I sadly couldn’t go because it was Freya’s second birthday but I wrote to him because I wanted him to know how important he’d been in my life.

This quote from one of the tributes makes me smile:

Many offers of support for Paul at the time of his illness were met with typically humourous responses including requesting arrangements for West Bromwich Albion to win the Premiership next season, and for him to score a century at Lord’s and a 147 at the Crucible.

As a sign of the respect in which he was held within our profession the National Council for the Training of Journalists (NCTJ) named a new award in his honour, which will be presented each year.

My thoughts are with his wife, his three children and two grandchildren whom he adored. I hope they can find some comfort in that fact that he was liked and admired by so many.

8 thoughts on “Farewell to a “legend” of the newsroom.”