What to say to people who ask: “Do you want any more children?” 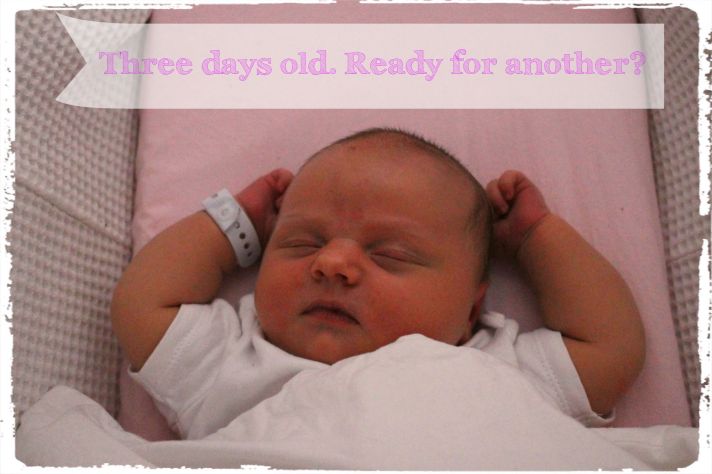 Almost as soon as we brought Freya home from the hospital people began asking: “So, do you think you’ll have any more?”

Back then it seemed more like a sneaky way of discovering whether we were finding new parenthood appropriately difficult (we were). The immediate and resounding “NO!” from both of us gained a few knowing smiles.

However, now she is edging ever closer to two, the question seems to have taken on new significance – and I’m being asked it more than ever. At softplay, in the park, wherever we go, in fact, strangers who I have often only said hello to have no qualms about posing the question.

I suppose it’s natural, in a way, they see no harm in it. Sometimes I think it might just be something to say – although it’s not something I would ever say but I wonder if that’s because I know my own answer is not as simple as a yes or no? Is anyone’s?

Usually I can dodge it because Freya is almost certainly about to hurt herself/another child/property (delete as appropriate) by behaving like a toddler so, as I dash off towards her, I shout over my shoulder: “Hah! I can’t cope with the one I have got.” Which seems to satisfy most people – and is also sort of the truth.

I often think, afterwards, what would I say, if pressed? Maybe the correct answer should be “that’s none of your business” but, as I said, I don’t think they see harm in it. However, if they ask such a question -and I’m willing to give an answer – I think they need to be prepared to hear the whole explanation, even if they might find it uncomfortable.

I suppose my initial response would be that I am incredibly grateful for having the one reasonably healthy – not to mention funny, spirited, beautiful, clever and generally happy – child I have. Even after more than 700 days straight with an average of two hours of sleep in one go, I still know how blessed I am to have her. She isn’t just enough, she is everything.

Before ever getting pregnant I always imagined having more than one, particularly because I have an older brother and would like Freya to have that lovely connection. I find it hard now to shake that desire. However, there are so many things holding me (us) back. Things that seem insurmountable.

For me, I think fear is the biggest one.

I’m afraid I won’t be able to get pregnant and then I will be thrown back into the absolute obsession of trying to conceive that consumed me after I lost the first and second pregnancies and until I finally saw those two lines that became Freya. My heart ached with the need to be pregnant, to feel that link with a baby growing inside of me again.

I’m afraid of how I would cope if I did get pregnant (and I have endometriosis/age to contend with) and then lost him or her (or the horror of the baby being diagnosed with anencephaly again).

I’m afraid that if I stayed pregnant, the 40 plus weeks would be filled with a fear that never completely goes away no matter how good the scans look.

I’m afraid of the trauma of actually giving birth which was no picnic with Freya (29 hours of labour, most of which found us ignored in a hospital bay, followed by an emergency c-section when it became clear she was struggling).

I’m afraid of whether the baby would have the same reflux/allergies Freya had/has and of seeing my baby writhe in pain day and night, refusing feeds and losing weight but not being able to do a thing about it. I know there are far far worse things that can be wrong, believe me, but I think if I can’t cope with something relatively mild what good would I be with something harder to deal with?

All of that is without taking into account things such as where we would put another baby in a two bedroom flat, whether we could afford another one and whether it would be the right thing for Freya.

I imagine, if another child was truly something we wanted, nothing would stand in our way so maybe that, right there, is the answer.

I still don’t think a simple ‘no’ covers it though.

Do you get asked the question? Have you ever told anyone to mind their own business?

16 thoughts on “What to say to people who ask: “Do you want any more children?””