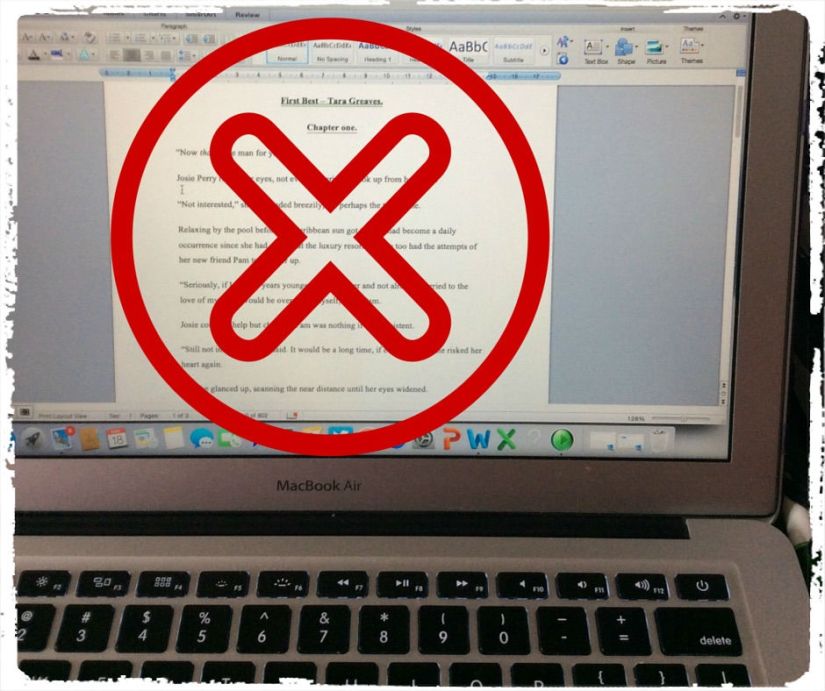 “That’s it. I will never write anything ever again,” I wrote to my husband, Heathcliff*. “Except this, obviously.”

If I could have found an emoticon with the back of a hand pressed against a forehead in a “woe-is-poor-talentless-me” sort of way, I would have sent that in the email too just to emphasise how distressed I was.

After seven years he is used to this sort of proclamation and takes it in his stride, possibly with a well-hidden roll of the eyes but definitely with the procurement of cake and/or peppermint hot chocolate. The difference this time was I actually had a proper reason; I didn’t get shortlisted in the romantic fiction writing competition when I DESPERATELY wanted to be.

I didn’t ever think I had a chance of winning but I thought my submissions were ok. You know, until I read them back after the shortlist was announced on Friday and then I thought they were the worst things I’d ever written. Even the titles of the other entrants’ work were better than mine.

To be shortlisted would have been a nod that I wasn’t wasting my time. That maybe my dream to one day publish a romantic fiction novel would become a reality. But when my name wasn’t on the list, despite me refreshing the page FIVE times, I decided that was it. The End.

The excellent BlondeWriteMore perfectly summed up my feelings in her recent post, Five Moods of a Writer. This is from number four, A Writer in Crisis.

Giving up writing feels like your only option. There is a lot of loud sighing, huffing and puffing coming from you. Friends and family give you a wide berth. This turmoil stage can go on for weeks or even months.

The only phrase during this mood is: “I am close to quitting”

For a couple of hours anyway.

And then I sort of got over myself.

As my lovely been-through-this-many-times-before husband pointed out, there could be all sorts of reasons why I didn’t make the cut in that competition – other than the fact I’m simply not any good, that is.

It is also rather arrogant to assume that I would be among those selected on my first go, I’m not exactly J K Rowling (if she wrote Mills and Boon).

To be (what I hope is) a good journalist has taken years of work. I find switching to creative writing hard. Whereas news reporting is all about telling people in the least amount of words possible, creative writing seems to be about showing them using as many words as you think necessary.

You know what, even if I’m never published (and clearly there are far worse things in life), that shouldn’t stop me writing for fun. From enjoying the craft of it all. And I think that’s where the confusion comes in; writing is my (much loved) job and it feels like the end result should be to be published (not to mention earn money) rather than just for my amusement.

To have been shortlisted would have been like being given permission to write fiction because it might one day go somewhere but I realise now I don’t need permission for a hobby. That it doesn’t need to go anywhere but my saved folder.

So this was an epiphany of sorts, to separate work writing from fun writing – and not just romantic fiction but blogging too. I’m never going to be a pro-blogger, I haven’t got the time or the will to put in the hard work to get that far – never mind the content – so why do I need to be ranked? I can see that people are reading the blog (thank you) from my stats, I don’t need it to be a competition (mainly with myself) each month. As a result I’ve removed the ranking badge.

I feel good, sort of free.

From now on, I will still work at writing outside of actual work but it will be purely for fun – although maybe I’ll publish some of my creative writing here.

When I am feeling brave.

And after I’ve given my Heathcliff a chance to recover from this episode first.

* Not his name but so excited about the new Bronte TV drama.

22 thoughts on “A Writer in Crisis (or the one where I am a teeny-tiny bit of a drama queen).”