But what do I blow my nose on? And other taxing questions about life without kitchen roll.

When my dream of becoming Queen of the Earth Mothers was kicked to the kerb by actual motherhood – or rather some associated issues, such as emergency c-section, reflux baby etc – I stuck my head in the sand and gave up (everything) for a while.

However, as I explained in this post, now that I’m finding my feet a bit, I’m keen to get back on that green brick road to a more sustainable lifestyle – not just because it will save money and help the planet but also because I think it is a nicer way to live.

The saying “old habits die hard” seems to be true in my case because gradually, without really noticing, I’ve been switching back to my old ways – even riffling through the bin to pick out bits mistakenly put there by my husband (I know, my life is so rock n roll). We have recently had a different scheme come in with lots of new things now able to be recycled, such as envelopes and yoghurt pots, and it’s taking some getting used to. (Don’t worry, he has now been made to memorise the leaflet we had pushed through our door and been tested on it. Just kidding, sort of.)

Anyway, I was looking for a challenge to mark getting myself back on track – only, as I’m still a bit shaky on the old mothering front, one that didn’t have me cowering in a corner (cloth nappies, anyone?)

I mentioned last time that I decided to give up kitchen roll as a starting point and several people said: “Er, why?”

Well, as part of my day job, I get to interview an assortment of wonderful people – many of them doing inspiring things in the green world (more of them to come in future posts).

I was recently lucky enough to speak to the lovely Karen Cannard, founder of The Rubbish Diet, for a future edition of The Suffolk Magazine.

Karen was (and still is when she has time) a blogger who took on a personal challenge to slim her family’s bin, which has, unexpectedly, led to all sorts of exciting things, including setting up The Rubbish Diet – a “slimming club for bins”.

As part of our (two hour, sorry Karen!) chat, she mentioned that after she had done all that she could to reduce, reuse and recycle she took a look at the things that were left in her bin – and one of the items was kitchen roll, which she decided to wean herself off.

It was like a light bulb moment for me. This could be what I did. You might think: “Hardly going to save the world is it, Tara?” And you’re right, obviously. But when you have a young child, with messes almost every other minute, kitchen roll is never more than a metre away at any given time – or at least that was the case with me.

As an idea of just how much I loved it, when I decided to give it up we still had eight (EIGHT) rolls of it on top of the kitchen cupboards to use. But, it is only as I have stopped reaching for it that I realised just how many different things I used it for. (Incidentally, is it only me who used it to blow my nose? My husband thought that was weird. “That’s what tissues are for,” he said. So posh!)

But what do you replace it with? Reusable cloths* that can be used, washed, and used over and over again – although I now have so many of them I could create a lovely colourful quilt (still not quite getting it, am I?).

We keep a bucket in the kitchen for all the bibs/muslins that we go through in a day so they don’t stink out the washing bin. After I have mopped up a spill or cleaned the oven I just rinse the cloth and stick it in the bucket ready to wash. Also, and I’m not sure whether this is necessary, I have different colour cloths to be used in the kitchen and the bathroom – it just seemed more hygienic, although might be pointless.

As well as saving stuff being sent to landfill, if you think about it, an eight pack of kitchen roll is probably about £4.50 and if we were using eight rolls a month, over the year, that would be more than £50 sitting in the bin.

So, while it isn’t going to change the world, I’m working on  “mighty oaks grow from acorns” and hope that this is just the start.

Anyone else willing to give up kitchen roll with me? Also, next up, monthly meal planning in a bid to cut some food waste. Anyone have any experience of this?

* Not for blowing your nose, obviously. I went with toilet roll that time but I’m all for hankies (which I’m going to make from muslins that are no longer needed). 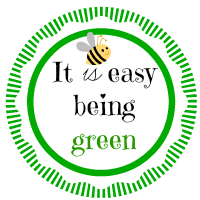 7 thoughts on “But what do I blow my nose on? And other taxing questions about life without kitchen roll.”