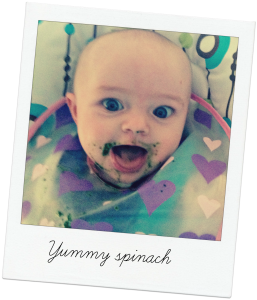 My daughter recently ate a small piece of bread.

At this point you might be thinking, “Dude!” (Because you are a Californian surfer). “Wait till she does a poop in a potty or writes her name for the first time. You are going to be A MESS.”  Yes, you are probably right, but there is a special reason why this set me off.

I’ve read a variety of blog posts recently about weaning – all excellent, I might add. One was factual, another funny and the last a “seriously, just get on with it” post but none of them really represented what weaning has been like in our household. *

We started early (at 17 weeks), on medical advice, in a bid to help settle Freya’s reflux. It apparently can help in many cases and I was excited. It felt like another milestone but also like we were finally going to be able to do something positive for her after an awful first few months. Unfortunately, and I didn’t know this at the time, a lot of the early weaning foods can cause more upset for a baby with an already sensitive tummy. Sadly, the only way to find out the “safe” foods is really through trial and error, although there is advice on things to definitely avoid. (If you are interested there is a good section explaining it here).

So, instead of getting better she got worse.

Oh, she loved eating at the start. I couldn’t get it in quickly enough but it seemed whatever I tried would result in her being up much of the night in discomfort and pain (not to mention what came out of both ends). To be truthful, it felt like I was poisoning her. It was a long way from the “fun” I thought we would have with new tastes and textures.

I asked for help from the professionals but it seems like many of those in the know either did not have much experience with reflux or believed I was just being a fussy new mother. I was told her troubles were “unlikely to be the food related” so we persevered – and by 10 months she was refusing to eat anything at all.

Maybe I should have expected it. Freya had become breast averse within days of being born, then bottle averse within months as a result, I suspect, of the pain of reflux. Even getting 30ml into her was a battle. She would bat the bottle away, writhe and scream, even though she was clearly hungry. Once on hypoallergenic milk, after she was eventually diagnosed as probably allergic/intolerant to Cows’ Milk Protein when her weight plummeted, things settled (although she was still up for hours at night with what seemed like tummy ache).

Just as I think she realised that bottle = pain (babies are cleverer than we think) she also twigged that food = pain and refused to eat.

It took several months of me trying to tempt her with a variety of different “safe” foods diligently sourced and prepared three times a day (while desperately searching the internet for advice) before she eventually started to eat again. But she would never, ever, touch bread.

Every day at tea time for six months I made her a piece of (dairy, wheat, gluten and soya free) bread (with Vitalite or a spread), toast, a fake cheese sandwich or a crumpet (along with the food she would eat).

For the first few months she studiously ignored it but I was still deliriously happy that she was eating anything at that point so I wasn’t that bothered – other than from a food waste point of view.

Then she stopped ignoring it and picked the slices up and starting flinging them  in every direction (I think this is a general experience of weaning).

And finally, just a couple of weeks ago, aged 16 months, she picked one up and put it in her mouth before biting a bit off.

I froze, torn between making a huge fuss of her or acting like it wasn’t a big deal (both of which are advised for hard to wean babies).

From nowhere, all the months of frustration and worry, of waiting and hoping and watching and picking food off my cream carpet, bubbled up and came out as tears.

It felt like a victory, albeit a small one. If she could eat bread, she might eat toast, or a sandwich – a whole new world opened up.

Maybe some of this is what “normal” weaning can be like but from the articles I read it seemed much more straight forward.

We are still waiting for a referral to a gastro specialist (and are no further forward than when I wrote this) so I have no idea whether she is intolerant to certain foods, her tummy is simply healing from the reflux or something else is going on. I worry that she isn’t getting enough vitamins or that I should be reintroducing things but now she is relatively pain-free it seems wrong to rock the boat. She still wakes in discomfort most nights – so clearly we are not quite there yet –  but it’s not nearly as bad as it was.

I didn’t write this as a ‘woe is me’ tale but weaning a reflux baby can be a lonely phase. And I know things could have been much worse but I wanted to give another side to weaning just in case there are other people for whom  “food before one is just for fun” doesn’t ring true – fun would be the last word I would use to describe our experience.

Did you wean a reflux baby or one with allergies or intolerances? I’d love to hear from you.

* Whenever I write about Freya’s problems I feel the need to qualify it by saying I realise there are parents who would give their right arm to have a baby who just doesn’t eat.  I can’t write about their experiences, I can only write about mine, but I do realise how lucky we are to have a generally healthy toddler.

12 thoughts on “When food before one really isn’t fun…”