Ah Prince George or, as I like to think of him, my future son-in-law 🙂 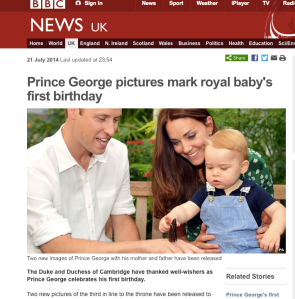 I remember this time last year watching rolling news on the television for most of the day while waiting for an announcement. I felt very sorry for the reporters outside the hospital who kept having to find new and ingenious ways of saying “no news” over and over again.

While I would always be interested in the birth of a future King or Queen, in this case I was glued to the screen – although, I admit, it was partly because I was heavily pregnant and it was too much of an effort to move in the heat.

Freya was due on August 22nd so I was still a month away from potentially giving birth myself (longer as it happened with her being four days late) but, even though our birth experiences would not be the same at all, I felt some sort of solidarity with the Duchess of Cambridge, which seems slightly ridiculous now. I blame the pregnancy hormones.

I did spend some time thinking about how different our children’s lives would be but not in the way you might think. Yes, Prince George has a life of privilege, the best education etc etc but his future is pretty much already written for him.  For Freya, the future is wide open. She can be anything she wants, within reason. And although I joke about her one day marrying Prince George, I can’t really say it is the sort of life I would want for her. To be picked over and have her every move watched, to not be able to pop to the shops or make a mistake without the world knowing about it. I’m sure there are many rewards to be royal and being able to serve one’s country but I think I would want her to have more freedom. And besides, I think we would certainly have to do a lot of work on her table manners if she wanted to socialise in such high circles.